Years before I trained as a monk, there was a period of time where I did as many drugs as I could possibly get my hands on. I don’t remember how long it was. Maybe it was a year. Maybe it was two years. Drugs make it hard to remember.

I loved drugs. They made me so happy. I would long for the nights and weekends, after school, when I could go and smoke weed or drop acid. When I could enter altered states of consciousness and feel happier in my body and my life. School was prison, hell. Out of school, drugs made me free, happy.

With my first girlfriend, I was terrified to have sex. We would come close to having sex multiple times, and I would get scared. I had the overwhelming feeling that somehow this was a bad thing to do, that this would have negative consequences for me in the future. So what did I do?

I got high. Had sex. It was great and terrible. Sex is great; getting high to have sex was terrible.

This is a story from the drug-heavy, drug-hazy period of my life.

The year was 2006. I was in the chorus, and all of the women were beautiful. I had crushes on all of them. I had the most elaborate recurring sexual fantasy at the time. The chorus had an award every month for “Chorus Student of the Month.” I hadn’t gotten it yet. I fantasized that I got the award, and there was a special prize. The main chorus room had a room adjacent to it, the MIDI Room, with piano keyboards and computers with MIDI and composing software on them for learning music theory and composing and also for fucking around on YouTube, the newest and coolest thing on the internet.

The special prize was that I could go into the small room, and bring any woman from the chorus into the MIDI Room, and have sex with her. I could even take multiple women there. I was to be honored, rewarded, for my choral excellence. It was a very naughty, shadowy, empowering, sex-positive fantasy.

One of the many women in the chorus was L. I thought she was adorable and I wanted to date her.

Like everyone else, L and I would chat on AIM, AOL Instant Messenger. I would give anything to see my chat transcripts from that era, the whole range: the banal, the awkward, the endearing, the intimate, the cringe.

I asked L to come over to my house and smoke weed with me. Neither of us had cars so she somehow managed to get a ride from her parents on a thin excuse. Not a maneuver I could pull myself. It was 7:30 PM on a school night and it was already dark out and a little cold. My parents were home so I met her outside and we smoked a bowl outside my bedroom window.

That took about five or ten minutes and then it was awkward. Shivering, we looked at each other- “now what?” It was kind of a date, kind of a hang out, neither of us knew, and we needed to do something.

Marijuana begets hunger and snacks, so eating was the obvious choice. There was a pizza joint five minutes from my house, so I proposed walking there. The place was famous for its Buffalo Chicken Calzone. I’m a vegetarian now but I still wish I could eat that calzone: just spicy enough, greasy breading, chewy meat, slathered in blue cheese dip. A perfection of flavor combinations. I’m salivating just thinking about it.

By the time we got there, it was 8:15 PM and the restaurant was set to close at 8:30 PM. We peered in the windows and the employees peered back, irritated and annoyed at new customers arriving just before closing. They wanted to get home and they still had an hour or two of cleaning to do after closing.

I walked in the doors, and it hit me, a full body high, coordination down, reasoning skills dropped, absolutely confused out of my mind, delirious with intoxication. My worst nightmare. Body stumbling; my awareness contracted, tightened; my eyes spiraling over the room like strobe lights on a dark and smoky dance floor.

Luckily, I knew what I wanted. A Philly Cheese Steak. I could see it clearly in my mind. Thin folds of savory meat, wrapped in melted cheese and warm bread. 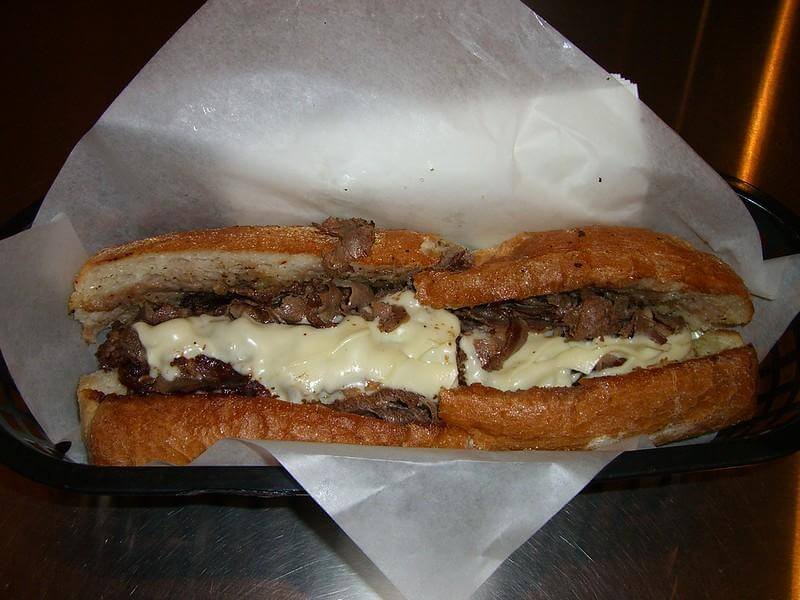 The only problem was that I couldn’t remember the name of the damn thing.

Luckily, I could remember the most important word: “sub.” So I stepped in line, my mouth watering, the employees poised in a wary, passive-aggressive stance, bound by their employers to feign politesse.

Now it’s important to note that, at the time of this story, I had a crippling personality flaw.

Say I was a guest at someone’s house. Hosts always offer an abundance of niceties to their guests. “Would you like an extra hand towel?”

So when the pizza store cashier asked if I wanted meat on my sub, my instincts spoke for me: “Oh, no thank you!”

“No thank you!” Chipper. Certain. Instinctual.

“No thank you!” Fate destined.

At this point they knew, without a doubt, that I was high. They knew it, I knew that they knew it, and I was embarrassed beyond belief.

And that, my friends, is how I paid $7.50 and a generous tip for a piece of cold bread that I ate slowly and with extreme embarrassment in front of a girl I had a crush on. I ate the bread quickly, eyes darting at the door, feet longing to bolt. She tried and failed to hold back giggles.

I don’t think we talked for several months after that.

Years later, I saw her at a bus station in a nearby town. She looked much skinnier, almost anemic, and her skin was taut and grey and dry. Her words were warbled, her mind seemed unclear – it dawned on me that she was very high on something far stronger than marijuana.

I felt guilty, regret. Had I enabled her to go down the path of drugs and self-harm? It’s hard to imagine it was my fault, but it felt like it was.

Thank you to Sasha Chapin for helping me to write and edit this post, and to Jane Miller for reviewing it and giving feedback.