I am training at the Monastic Academy in Lowell, VT.

I want to help monasteries flourish in the modern world.

I write about meditation, monasteries, productivity, strategy, and more. 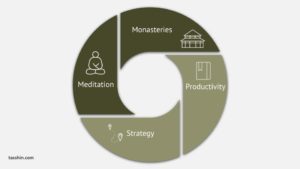 For as long as I can remember, I have been a reader, a writer, a thinker and autodidact. I have been practicing meditation since 2010, and am still very much a beginner. I am now fascinated by the relationship between my mind, my contemplative practices, and my body.

I attended St. John’s College (A’13), where I wrote my senior essay on Plato’s Phaedrus. As I studied the books on the College’s program of study, I read mystics like Plato, Plotinus, and St. Augustine; in my extracurricular reading, I also encountered works of Eastern religion, including the Dhammapada, the Bhagavad Gita, and the Tao Te Ching. Like many before me, I realized that the essential sameness of these works transcends their apparent differences. I then began a meditation practice as a pragmatic way to experience the perennial truth of mysticism.

In 2018, I took bodhisattva vows with Shinzen and Soryu, and received the name Tasshin, 達真. 達 means to “reach,” “arrive at,” “achieve,” or “touch.” 真 means “truth” or “authenticity.” Most people pronounce this with the Americanized pronunciation, which sounds like the English words “toss shin.”

Here are the blog posts and resources that I think are my best: