Productivity should adopt an idea from military and business strategy: the distinction between peacetime and wartime.

Ben Horowitz, the co-founder of the venture capital firm Andreessen Horowitz, made this distinction for business strategy in his 2014 book The Hard Thing About Hard Things. Peacetime and wartime “require radically different management styles” from CEOs:

Peacetime in business means those times when a company has a large advantage over the competition in its core market, and its market is growing. In times of peace, the company can focus on expanding the market and reinforcing the company’s strengths.

In wartime, a company is fending off an imminent existential threat. Such a threat can come from a wide range of sources, including competition, dramatic macroeconomic change, market change, supply chain change, and so forth.

Horowitz borrows this distinction from military strategy, using it as a metaphor for business strategy. As David Fallarme points out in this tweetstorm, the metaphor of peacetime and wartime can easily and usefully be extended to the domain of productivity.

Peacetime productivity is when you have room to breathe. All is well with the world. Your plans and goals make sense, and there are no big emergencies. Most importantly, you have enough margin in most or all of the most important areas of your life. You have time to do the important projects you need to for your work. You also have time to restore yourself personally: to take care of your emotional and mental health, to spend time with the people that matter to you.

In peacetime, success boils down to consistency and execution. Attend your stand-ups, do your regular reviews, work your task manager and notes apps to complete your deliverables. Get good sleep at night and avoid heavy lifts.

Wartime productivity is when the unexpected hits. Perhaps there’s a big emergency: the website down, your team’s product isn’t working as expected, or a customer is furious. Or maybe you’ve simply received a new piece of information that changes how you see the world and what you’re aiming to accomplish.

Broadly speaking, there seem to be two kinds of wartime productivity:

Either way, in this state of affairs, you can’t operate in the same way. Important decisions need to be made on very short timelines – minutes to hours. If you’re working with a team, you will probably be expected to be immediately available to respond to alerts or changes.

Precise and consistent use of your day-to-day systems may not make as much sense. You can’t count on using your calendar – all your appointments may need to be rescheduled. Inbox zero is a luxury – star emails that need urgent responses for when you have a moment at your desk.

Perhaps the best approach is to use an incident command protocol, or rely on other best practices that you or your team have developed. Failing that, the best thing to do is to roll up your sleeves, and dig in where it makes sense. Failing even that, if nothing makes sense, and everything is chaotic – start somewhere, anywhere.

I remember earlier this year, I was suddenly thrown into wartime. I was on vacation. It was the day after I gave a presentation in Atlanta at the first ever US-based MapCamp. I had prepared for the presentation for several months, and I was grateful to see that it had been well-received. With the presentation finished, I had a little time to relax with friends and family in Georgia before returning to California, where I was starting a new location of our monastery.

Even though I was on vacation, I got an unexpected phone call from my work. The phone call was an invitation to return to Vermont, where I would be promoted to Assistant Director and Fundraising Manager. In time, they wanted to make me Executive Director. A similar plan had been in the works for some time, but now it was happening ahead of schedule.

With one phone call, everything had changed. I had expected to be in California for another year or more. Suddenly, I needed to leave California as quickly as possible. I had three weeks to tie up loose ends in California and move across the country. This was war – wartime productivity, that is.

I spent the next few weeks saying goodbye to friends and contacts; planning various logistics on both coasts; packing bags, and buying plane tickets. All of this entailed a high volume of sudden and unexpected work. I had to cancel existing plans and make new ones. When I arrived in Vermont, I had to spend the next few weeks cramming in new information and learning new skills as quickly as possible so I could manage our team successfully. It was only after a few weeks in Vermont that I started to fall into a new “normal,” and could return to peacetime productivity.

Horowitz points out that “most management books describe peacetime CEO techniques and very few describe wartime.” The same could definitely be said of productivity books and methods. For example, a key habit in the GTD system is regularly checking your task manager. In war time, it may be better to set your normal task manager aside for a time, and to create a new, essentials-only task list.

Similarly, weekly reviews, which David Allen describes again and again as the cornerstone of a solid GTD system, may make less sense. Either skip them, or do an abbreviated version that’s faster and focused on the most important.

In war, you may need to adapt or drop your normal productivity habits and systems. Ride the waves of chaos, trusting that you’ll return to normal when you can. 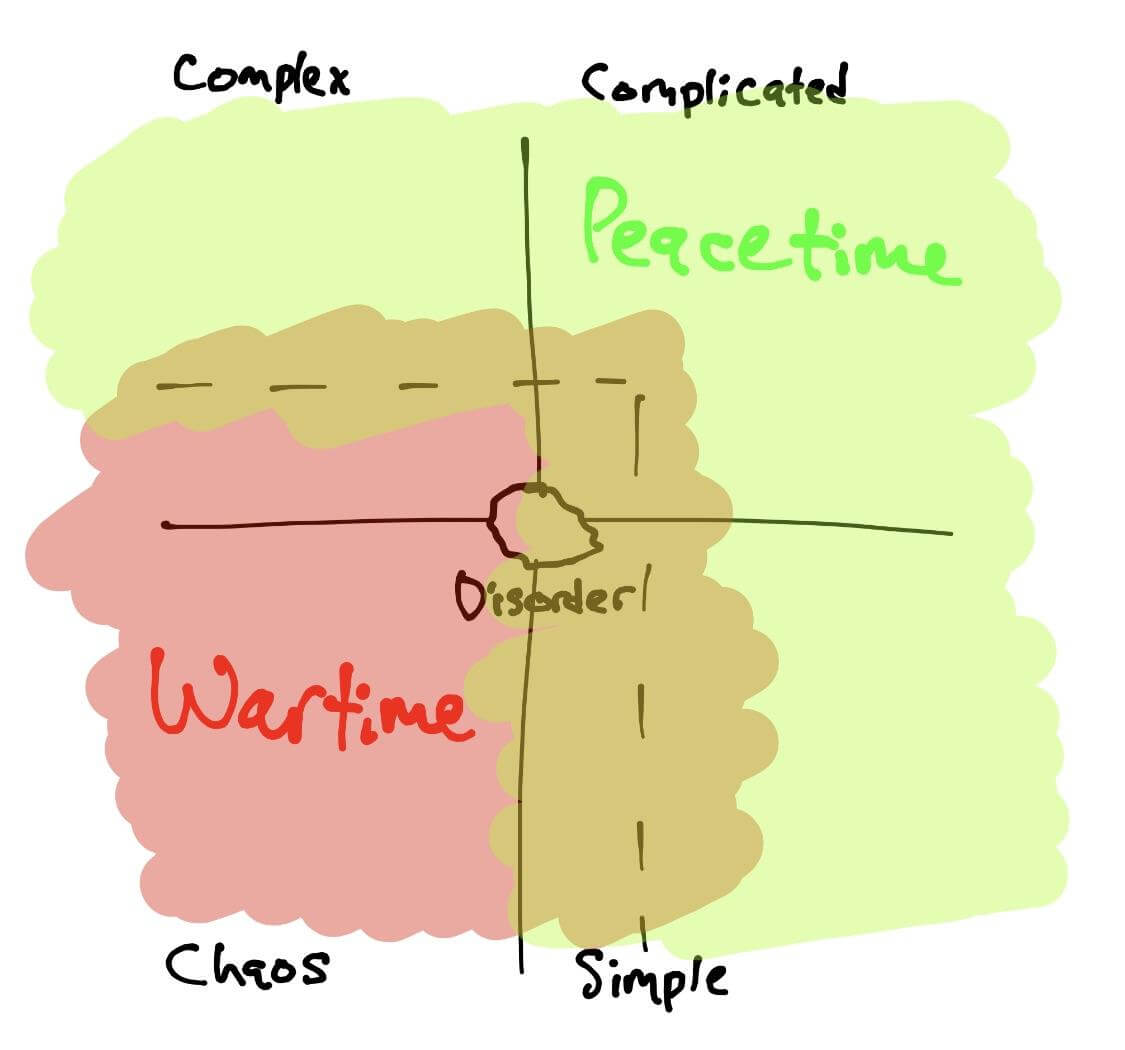 Although I’ve shared some guidelines for staying productive during peacetime and wartime, there are no hard and fast rules, so don’t worry too much about getting it right the first time. You’ll also need to experiment with what makes sense for you.

In my experience, simply having this distinction between peacetime and wartime has improved my overall productivity skills. I am better able to notice what mode I’m in. I can see in real time whether my efforts pay off, and where they are optimal or suboptimal. Over time, I have gradually improved my instincts for discerning when I’m at peace and when I’m at war, as well as my sense of what’s required when.

Peace and war time productivity are fundamentally different – learn to recognize which you’re in and how to play accordingly.

As the great strategist Sun Tzu said, “It is only one who is thoroughly acquainted with the evils of war that can thoroughly understand the profitable way of carrying it on… In war, then, let your great object be victory, not lengthy campaigns.”

Special thanks to David Fallarme’s tweetstorm for originally alerting me to this concept, and to Tiago Forte, Ben Mosior, Divia Eden, David Howell, James Stuber and others for discussing this concept with me.

If you enjoyed this post, give the Digital Productivity Coach a try. It's an interactive coach for digital productivity, available 24⁄7 to give you a feasible next step to improve your productivity skills.