The Four Facets is a model of human development that attempts to delineate the essential aspects of a ‘full spectrum’ approach for human flourishing.

Most credit Ken Wilber and the integral movement for its origin, however, according to Zak Stein, they were in fact first delineated by Chögyam Trungpa.

There has been increasing discussion of this model over the past year or so in the circles online that we frequent. Initially, it struck us a remarkably comprehensive way of presenting the different aspects of human development, considering the complexity of human life and maturity.

This post introduces the Four Facets model and various perspectives on what each facet does or does not include. It closes with a discussion of the ways we’re currently using it in the context of the training at the Monastic Academy.

The Four Facets intends to delineate a full spectrum approach to human development. Proponents of this model claim that a model of growth lacking any one of these facets is incomplete, and will not enable an individual to reach their full potential. The Four Facets are waking up, growing up, cleaning up, and showing up. 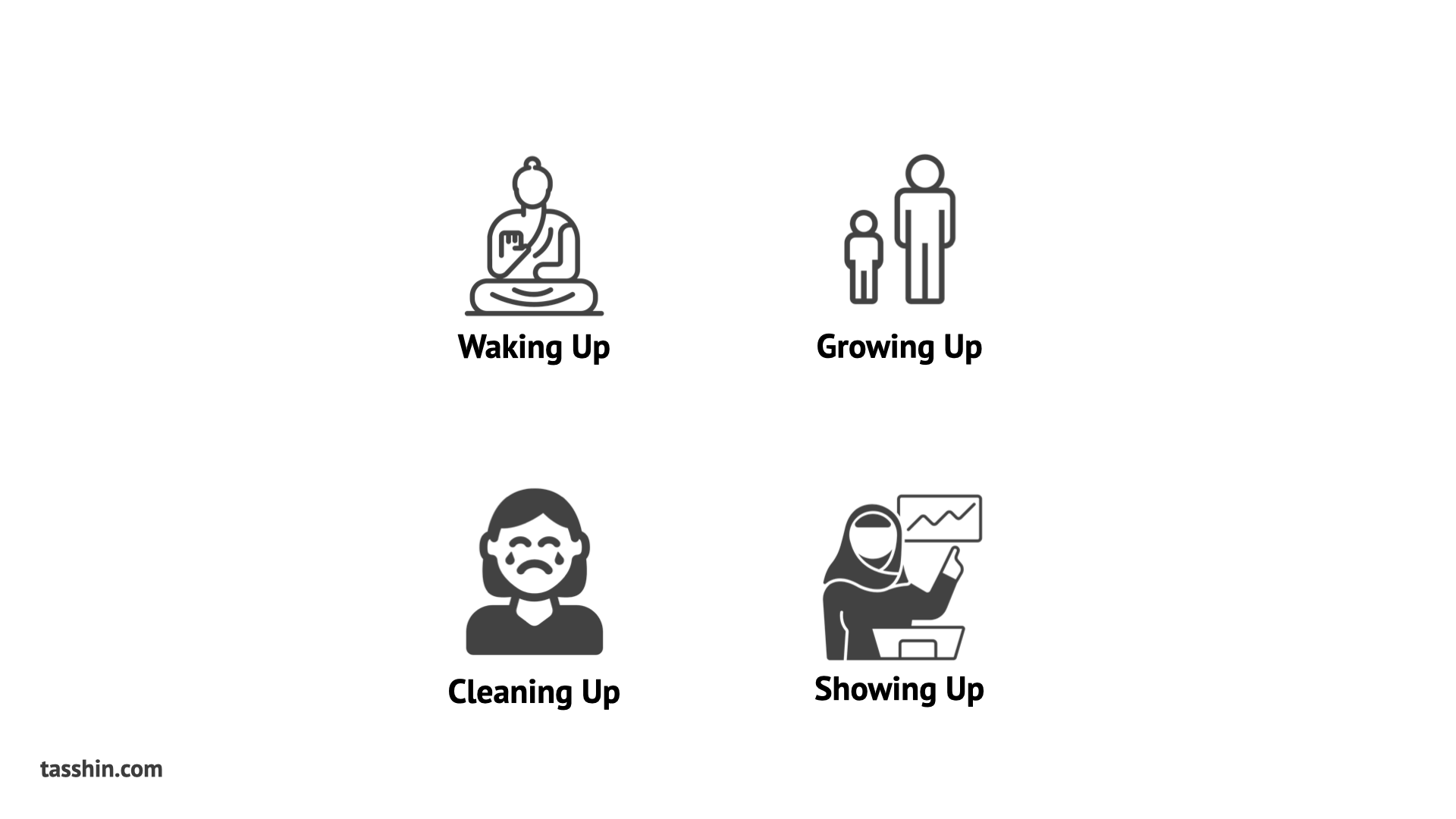 Waking Up and its Limitations

Waking up refers to classical enlightenment, or liberation from suffering. The awakening process is commonly connected to traditional Buddhism, but is described in many contemplative and spiritual traditions.

Although there are differences between these traditions – both classical and contemporary – about issues such as what, exactly, constitutes enlightenment, and whether the path ends or is infinite, there is wide agreement that the pursuit and realization of awakening is real, possible, and extremely valuable.

However the four facets model helps us understand that waking up is insufficient for a full and healthy human life. The initial impetus for naming and defining the other three facets was a recognition that seemingly-enlightened people in our culture occasionally behave in unethical and harmful ways: engaging in drugs and alcohol, theft, and sexual abuse, to name just a few cases.

Ken Wilber has claimed in interviews that human beings only discovered psychotherapy and adult developmental psychology (cleaning and growing up, respectively) in the last 100-150 years. Thus the addition of the cleaning up and growing up dimensions are relatively recent innovations in developmental pedagogy.

However, from our perspective, this is a misrepresentation of history, since most monastic institutions included intentional virtue cultivation (growing up) and the inevitable working through of patterning that happens in communal living (cleaning up). Daniel talks about this with our teacher, Soryu Forall, on his podcast episode “Manufactured Awakenings.”

Growing up is equivalent with the field known of adult development. Prominent theorists include Robert Kegan, Terri O’Fallon, Bonnita Roy, Otto Laske, and Michael Commons. Some figures within the metamodern sphere, like Tomas Björkman, hold a primarily growing up perspective on civilizational progress.

Unfortunately the discourse around ‘growing up’ and adult development often gets over-simplified and has a tendency to get captured by the objectives of the global capitalist system—which drives towards ever greater cognitive complexity as it’s developmental aim (typically leaving ethical development behind in the dust). Many of the conversations on Emerge attempt to poke at the narrative about growing up as a matter of complexity, and see if instead we should be talking about ethical development or other kinds of potential paths of development. See the Emerge episodes with Robert Kegan or Jonathan Reams for more on this subject.

Cleaning up is psychological and emotional healing from trauma. There has been a tremendous renaissance in the field of trauma and healing in recent decades. We have seen the birth and recognition of practices such as breathwork, Trauma Release Exercises (TRE), Internal Family Systems (IFS), the use of MDMA as a treatment, and the Bio-Emotive Framework. Each of these methods are effective means of cleaning up.

Most thinkers suggest that cleaning up is essentially an infinite task, and different people come to the table with different amounts of junk in their trunk. In any case most of us who have grown up in this pathological culture have emotional and psychological wounds.

In recent history failure to do the work of cleaning up has been the most common failure mode of human development. The classic example is of individuals who go deep into waking up without cleaning up and have incredible experiences on the cushion but crumble in difficult or complicated relational dynamics or act out of unmet emotional needs in immature ways.

Soryu likes to point out that monasteries have been places where people grow up and clean up throughout history, and they continue to be effective at these tasks even as our society manifests new neuroses to deal with.

As with growing up, there are different accounts of what showing up entails.

Some people represent showing up in practical, material terms: what job do you have? Is it right livelihood? Do you use your time to benefit the collective? That’s your showing up.

Ken Wilber describes showing up as the infinite learning of the multitude of human disciplines.

Others discuss this dimension of human growth in terms of ensoulment and soulmaking. Jonathan Gustin, a teacher at the Purpose Guides Institute, talks about showing up as equivalent to soul work. Soul work has a long history going back to Henry Corbin, through James Hillman, and most recently, Rob Burbea’s Soulmaking Dharma. It has to do with listening to the call of the various intelligences of the world. From this perspective, the point of showing up is to clarify and embody your soul’s calling.

The Development of a Monastic Curriculum

Over the last couple of years, Daniel has been working on developing a curriculum for the Monastic Academy. This work on a curriculum has culminated in the creation of our Awakened Leadership Intensive (ALI). The ALI is an event we run 3-4 times a year as a way to introduce new cohorts of apprentices to our training system.

The ALI consists of several days of intensive, full-time training on our monastic schedule. By the end of an ALI, new apprentices (or guests) understand our vision, culture, and have first-hand experience in the different techniques and frameworks we make use of.

The different methods in this ecology of practices are mutually supportive and informing. Living in a community of practitioners further accelerates this progress. Adding an explicit terminology and framework around this work encourages these compounding effects.

Connecting our ecology of practices to the Four Facets has led to fruitful conversations and developments (and some productive disagreements), as we develop and iterate on the curriculum and culture we are building. It has also led to new ways of understanding the Four Facets.

While the Four Facets are usually discussed as a simple collection, they can be organized and related along two axes: constructive vs. deconstructive, and personal vs. transpersonal. 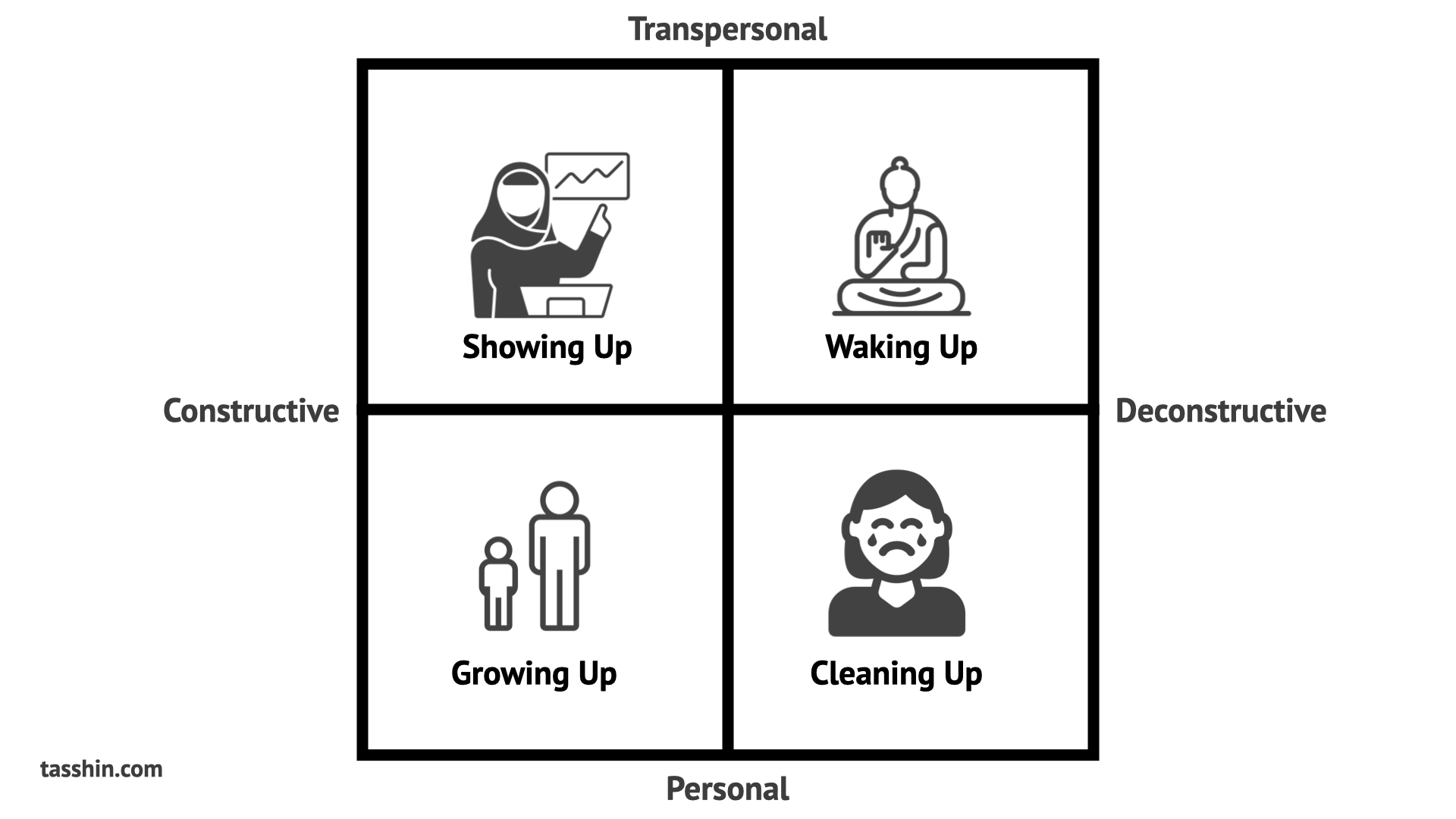 For our curriculum, we have found it useful to modify the model further, representing the facets as a nested holarchy: 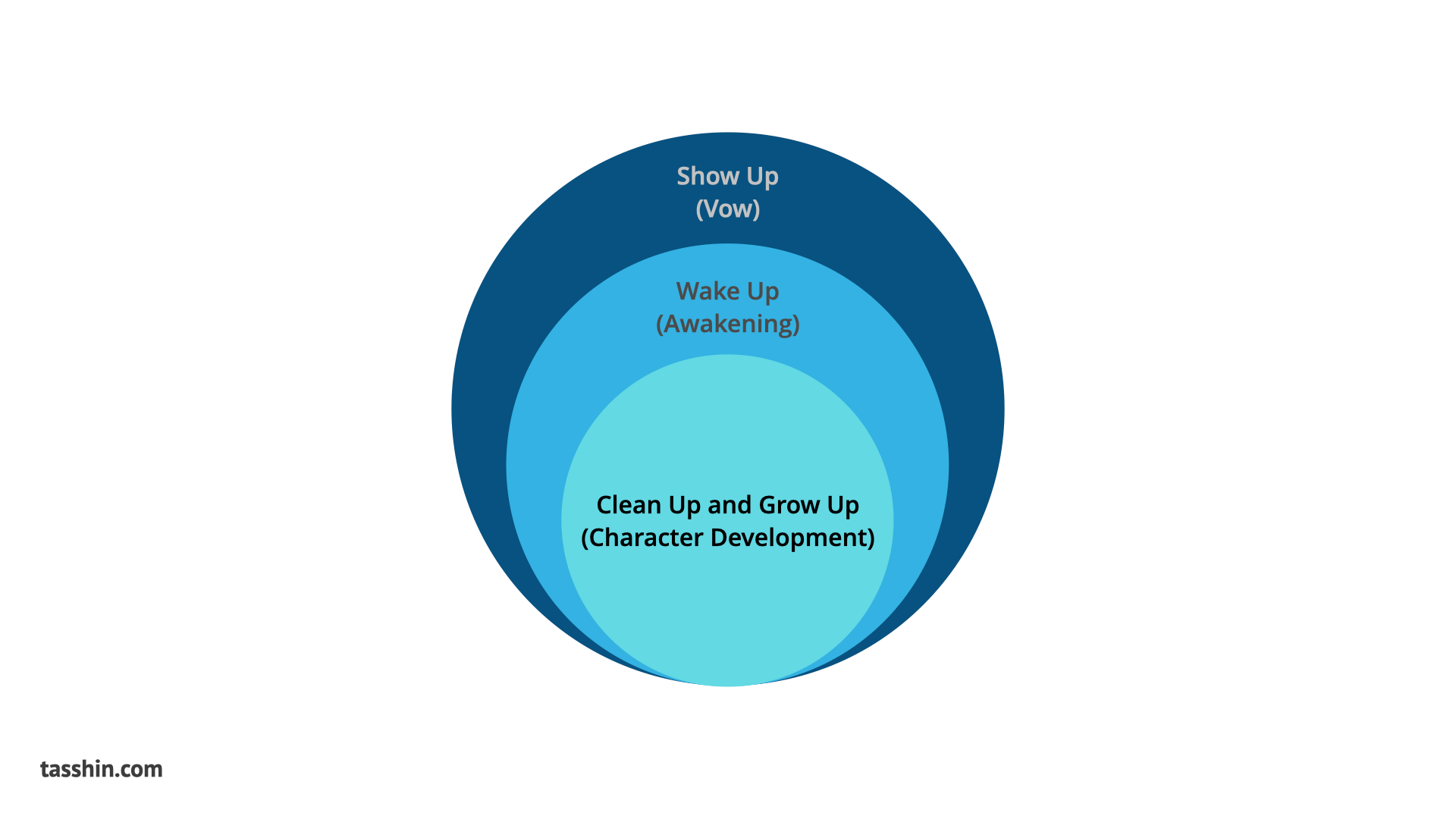 At the bottom of the holarchy are cleaning up and growing up, which could simply be called Character Development. Those two work together in order to bring us to a point where we can achieve Right Awakening. Finally, both our character and our awakening are seen as being in service of living our vow.

A “vow” is a concept in our tradition. It describes one’s own unique commitment to being of service to others and all life. A vow emerges at the conversation between one’s own skills and desires, and what is needed by the world. It is similar to the concept of a purpose (“my life purpose”) but is less deterministic or individualistic.

Second, all of the other three facets – Clean Up, Grow Up, and Wake Up – feed into truly living your vow (Showing Up). Showing Up is the culmination or fruition of prior work in the other facets. Relatedly, one’s efforts to Show Up without Waking Up (or Clean Up and Grow Up) are incomplete and potentially misguided.

According to our teacher, Soryu Forall, this ordering is the traditional way that these practices were arranged within the monastic institution. We’re simply changing the language and adding new techniques to some of the categories.

Thank you to Nathan Hechtman for helping to draft this post.