Thinking is a skill. I have it. I have cultivated it. I am good at it. You probably are, too.

Not thinking is also a skill. I have it. I have cultivated it. I am good at it.

It is like how your body needs both motion and stillness. You need to move your body to exercise, and you need to rest each night. You need to move to chop vegetables, or to reach for something on a shelf. Movement is required when you dance for the sheer joy of swaying your body.

But you also need times of stillness. Curled up on a couch, reading a book. Listening quietly as someone you love speaks what’s on their mind and heart. Or, simply meditating – sitting down, following the breath, calming the body, centering oneself and allowing the mind to quiet.

It’s not widely known that it’s useful to be able to not think- but it is. Multiple times a day, I will have a particular sensation arise in my chest. It bubbles up my spine, into my head, like hot air rising. Something in my body wishes to manifest as a thought. I feel it before I think it, before I hear it. I can even understand it – I can know its content in a non-discursive way.

All thoughts are like this for me- but there is a specific flavor, where I am aware that the thought that wishes to arise is negative, harmful, unhelpful. At that moment, I can choose to not think that thought. I don’t buy into it. I don’t feed it.

It’s not that thinking is bad, or you should never do it, but not thinking is a useful skill to learn, especially in meditation.

It’s actually pretty easy to learn to cut off a thought. You’re thinking, and then you just do something, anything, and get out of it. Maybe you follow the breath, or listen to a sound, or feel a body sensation. It doesn’t really matter what you do – if you pay attention to anything in your experience that isn’t thinking, that’s cutting off the thought.

But staying there, not thinking- that’s the hard part. Or at least it was for me.

I spent the first months of 2020, doing extensive solitary retreat in the woods of rural Vermont, ignorant of the unfolding of a global pandemic. This was during my training at the Monastic Academy, MAPLE. I spent the bulk of that retreat improving my ability to not think, to see where that skill took me.

In every retreat I ever sat with my teacher, Soryu, the goal was simple: follow the breath, stop thinking, and break through. Attain classical awakening.

I was following my breath. To make a long story short: Soryu made it clear that it was time for me to stop thinking.

I had trained for years to think. My whole life had been built around thinking. Public school, college, my hobbies – reading and writing, writing a blog – all revolve around the central human activity, cognitive thinking. There was so much momentum in the direction of thinking – and Soryu was asking me to go in the exact opposite direction.

At a certain point, I noticed that I couldn’t make it more than ten seconds without thinking. Ten seconds felt like an insurmountable barrier. I became desperate. I needed help. I needed a miracle.

Then I had an idea. I remembered something that had happened many years ago, in the very first year of my training. At that time we were seeking a sustainable business model for the organization. We came up with an idea, coworking. Maybe people would like to work remotely from the monastery. And they did – it was a good idea. This program is still running at MAPLE to this day.

At the time, we thought that remote workers interested in meditation might be even more interested if we had different tools and gadgets available, tools that aid with mindfulness practice. These are sometimes called “techno boosts” in the meditation community.

Take the Muse Headband: an EEG headband that purported to measure distraction and concentration, giving feedback so you could teach yourself to focus more quickly.

Or the Spire: a device that tracked your breathing rate and respiration, to alert you when you were anxious or tight, and to help you establish healthy, calm breathing.

As far as I was concerned, these were harmless at worst and mildly supportive at best, but probably mostly gimmicks.

We’d also purchased a Pavlok. The fabled Pavlok. The Pavlok isn’t marketed towards meditators, but it proved to be anything but a gimmick.

The Pavlok is a tool for removing bad habits. It’s a wristband. You wear it all day, and every time you engage in a bad habit, you can helpfully shock yourself with the band. If done consistently, you associate the bad habit with the shock, and your nervous system naturally wants to avoid it. 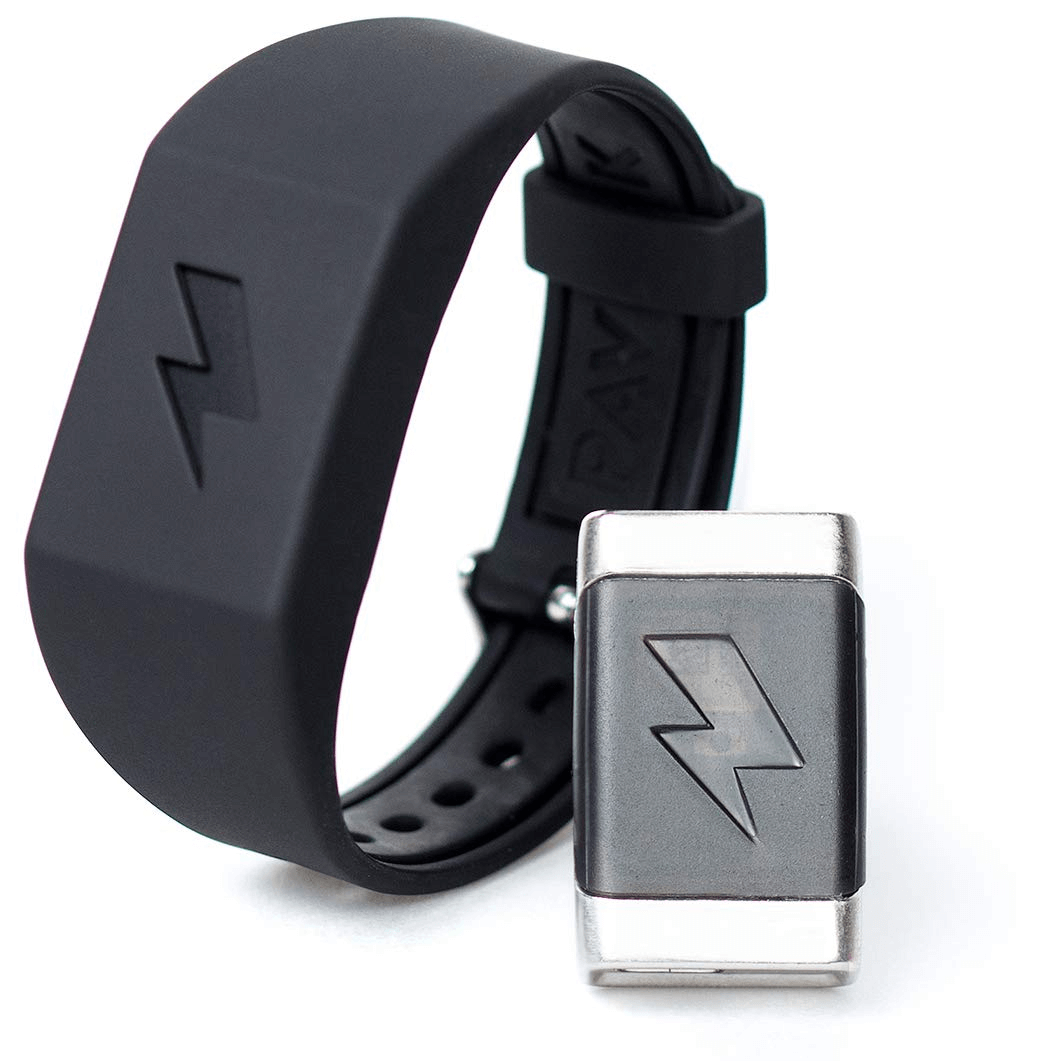 Even though the Pavlok wasn’t intended to be a meditation device, we thought our guests might be interested in using it to improve their habits.

At the time, people had a lot of fun just trying it on and shocking themselves. Soryu, my teacher, was particularly excited. He had used pain extensively in his meditation practice during his time in a Zen monastery, as a way to enter concentration states – so he was excited to see – just how painful was the Pavlok?

I didn’t try it. I was terrified of even a little bit of pain. Even when my friends said it wasn’t that bad, I wasn’t willing to try it.

Everyone laughed. It was a joke – just a joke. But that joke laid dormant in my consciousness for about five years. And then, there I was, in a predicament: I couldn’t make it eight or ten seconds without thinking.

When you have a problem in meditation, you have to get creative. And, faced with my overthinking problem, I remembered Daniel’s joke, and the Pavlok. He was joking of course – but I was desperate, and it might just work.

And I started thinking: whatever happened to that Pavlok? I realized that it was probably in one of the storage rooms in the main building.

There I was, in my cabin, in the middle of the cold Vermont winter, and this thought lit a fire under my ass. I dashed to get my warm clothes and boots and gloves on, and I ran to the main building. I’d been avoiding the people at MAPLE, trying to avoid eye contact and overhearing conversations that could distract me from my practice, but that was a luxury. It was the middle of their work day, there would be people everywhere, but I needed that Pavlok.

I ran into Patronus. All the rooms at MAPLE have names, and Patronus is the room where all the weird shit is, the miscellaneous room. It was where I suspected the Pavlok was stored.

Someone was in there, a resident at the Monastic Academy. I hadn’t spoken to him in six weeks at this point, and suddenly I had to say: “Sorry, I’ve got to grab something!”

He said: “Okay, I’m not supposed to talk to you, but cool. Go ahead. Be my guest. I’m just processing receipts.”

So there I went, burying through the cupboards: “Here it is. Yes! The Pavlok! It’s my salvation!”

The box was dusty. It had been five years after all, and I doubt anyone had used it since then.

I opened it up, and read the instruction manual. It had two nine volt batteries with it. Thinking about it now, the Pavlok is basically a glorified nine volt battery with excellent marketing copy. But, holding it in my hands, it felt like the thing was going to save me from the dishonorable failure of being unable to not think for more than ten seconds.

I put the nine volt battery in, and plugged it into my cell phone charger, which I had recovered from one of my boxes in storage to charge it with.

(Master Torei, Hakuin’s chief disciple, famously stuck himself with a needle to stay awake when drowsiness threatened his meditation practice.)

I charged both of the batteries. I plugged the first one in, and it didn’t work.

I felt very nervous, but I didn’t panic quite yet. I tried the second battery. Thankfully, it worked.

It was clear that it had sort of faded, but it actually worked – astonishingly, compassionately, it worked. I was going to be able to shock myself.

So I started wearing it, and I tried shocking myself. It really wasn’t so bad after all, you’ll be interested to know. In fact, it was not very strong at all. The manual said that if the current isn’t strong enough – which it wasn’t – then you can put it directly on your veins. So I started wearing it backwards, with the current directly on the vein of my hand. That certainly put a bit of a kick into it.

There I was, wearing this nine volt battery strapped to my veins all day long, and anytime there was any thought at all, I shocked myself. “AHHH! AHHH!!!” Just shocking myself all day long.

One of the best parts of this new approach, shocking as it was, was that I could suddenly do walking meditation. Previously, I had no hope in the world of being able to do walking meditation without thinking. That meant I was confined to seated meditation, with all the leg and back pain that that entailed. But equipped with this portable electric shocking device, it was easy to avoid thinking, even while walking. So I just walked, and walked, and walked – shocking myself as needed.

That day, I shocked myself consistently for six, eight, nine hours. Consistently. Every time I thought, I was instantly in pain- “AHH!”

That night, in the cabin, I entered the deepest concentration I had yet been in. It wasn’t some huge concentration state, but it was noticeably different and it was great. It was amazing. And this weird strategy I’d come up with – shocking myself vigorously whenever I had any thought at all, sometimes 20 times a minute – worked. It really worked.

Thank you to Sasha Chapin for helping me to write and edit this post, to Molly Gordon and Cam for encouraging me to write it, and to Jane Miller and Charlie Trochlil for reviewing it and giving feedback.