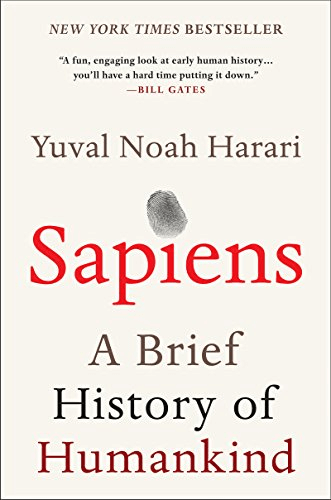 Harari is a controversial intellectual figure – some people love him, and some people hate him.

My teacher, Soryu Forall, has been very influenced by Harari and considers him significant as the first major Western thinker who is a Buddhist. Harari has practiced Vipassana meditation as taught by S. N. Goenka for years, doing daily practice and going on an extended meditation retreat for 30 days or longer each year; he dedicated Homo Deus to Goenka, “who lovingly taught me important things”, and said “I could not have written this book without the focus, peace and insight gained from practising Vipassana for fifteen years.”

Harari’s work has influenced Forall and the teachings at MAPLE in a number of ways. One of the major ways is Harari’s emphasis on stories or narratives as the coordination mechanism that has given Homo Sapiens its power. At MAPLE, we accept this as an axiom.

Another major influence from Harari has been his description of Humanism. Harari says that while theist religions have lost their importance in the last 300 years, we have seen “the rise of a number of new natural-law religions, such as liberalism, Communism, capitalism, nationalism, and Nazism.” For example, “the typical American nowadays is simultaneously a nationalist (she believes in the existence of an American nation with a special role to play in history), a free-market capitalist (she believes that open competition and the pursuit of self-interest are the best ways to create a prosperous society), and a liberal humanist (she believes that humans have been endowed by their creator with certain inalienable rights).”

While Harari points out that “these creeds do not like to be called religions” – preferring to be understood as “ideologies” – he says that this is just semantics, and that these are best understood as religions, which he defines as “[systems] of human norms and values…founded on belief in a superhuman order.”

Humanism worships “humanity, or more correctly, Homo sapiens”: “Humanism is a belief that Homo sapiens has a unique and sacred nature, which is fundamentally different from the nature of all other animals and of all other phenomena. Humanists believe that the unique nature of Homo sapiens is the most important thing in the world, and it determines the meaning of everything that happens in the universe. The supreme good is the good of Homo sapiens. The rest of the world and all other beings exist solely for the benefit of this species.”

Within humanism, there has been a schism, into three major, rival sects: liberal humanism, socialist humanism, and evolutionary humanism.

Liberal humanism is the “orthodox branch” of Humanism, the most important and dominant branch. It sees humanity in terms of individuals, whose “liberty” is “sacrosanct.” Our own individual feelings, values, and preferences should determine our ethics, politics, and aesthetics.

Socialist humanism sees humanity in terms of collectives. Rather than privileging each person individually, it looks to benefit humanity as a whole. It values equality of humans, economically, politically, and ethically. 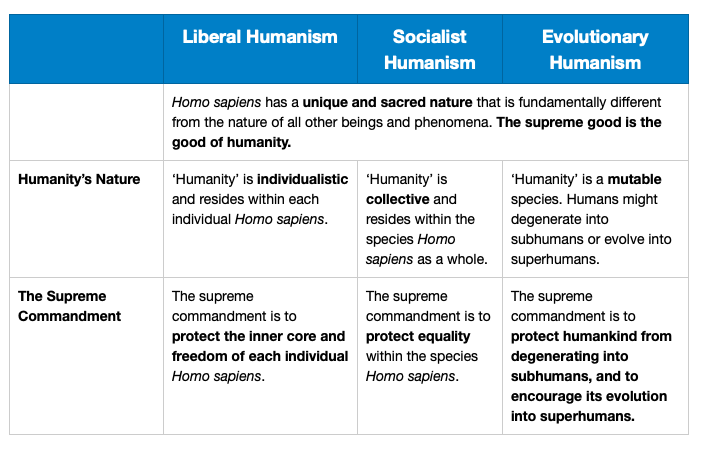 Adapted from a figure in Harari’s Sapiens

It’s important to note that Harari is providing his own meaning to and interpretation of the words religion, and humanism, in developing a model that can describe contemporary worldviews. As the famous saying goes, “All models are wrong, but some are useful.”

At MAPLE, we have found Harari’s model of humanism to be a helpful starting place for understanding contemporary worldviews, as we search for a new worldview that goes beyond humanism’s flaws. We need a new story, dedicated to serving all life, crafted by leaders who are able to drop stories entirely through intensive contemplative practice.

Thank you to Henry Hirsch and Timothy Roy for reviewing this post.