Zachary Stein’s Education in a Time Between Worlds is an impressive feat of scholarship, activism, and education.

It contains six essays, each of which can be read in one sitting. Stein’s stated goal is to “transform readers” with his book, which he describes as “a psychoactive agent or learning catalyst.”

The book’s guiding question is, “What should education look like in the twenty-first century?” 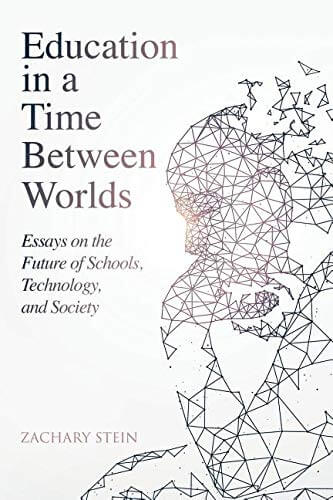 The author posits that “the years between 2000 and 2050 represent a critical turning point in the history of humanity and the planet.” The twenty-first century as a whole will be filled with challenges of unprecedented complexity, like global warming and social unrest. Each of these challenges have “critical educational dimensions.”

Stein is not content to merely give compelling descriptions of the problems we face. He points to possible solutions, which are bold and unprecedented, but just might work. He offers a sober yet hopeful perspective, without falling into the trap of resignation to collapse and dystopia, or naïve, starry-eyed optimism.

The Great Meta-Crisis of Our Time

We face many enormous, complex problems today. Some of these problems are known, while others approach, unknown, as shadows looming on the horizon.

Stein sees a common strain amongst these problems from an educational dimension, what he calls the “great meta-crisis of our time” – a capability crisis.

In order to survive the problems we face, he says, we need “people with unprecedented skills and capacities—people with fundamentally new kinds of identities.”

While evidence suggests that humans have enormous potential, including skills such as “world-centric morality, universal compassion, meta-paradigmatic thinking, and a whole slew of others” – these skills are rare and, even where present, they are unevenly distributed.

This is because educational systems were not intentionally designed to systematically produce such qualities. What Stein calls “reductive human capital theory” has led education to focus on “the limited technical challenge of arranging for the ‘functional fit’ of individuals into the economy and social system.’”

As a result, “the vast majority of humans on the planet are below the critical levels of capability that enable world-centric identity formation and reflective and democratic civic participation.” This is the capability crisis, “the mismatch between the demands made on us by the world and the capabilities we have to work with…characterizing the struggles of individuals, organizations, and nation states.” 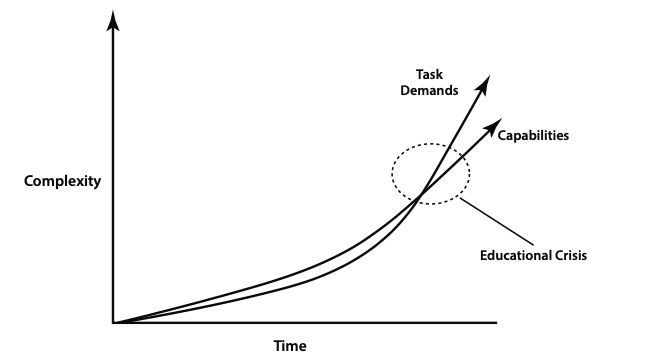 Stein is not content to accurately describe the problems we face. He proposes a swath of bold but pragmatic solutions, listing thirteen of what he calls social miracles:

Some of these solutions were familiar to me (“Basic income guarantee”). Others were familiar, but described in new ways, from new angles. Still others, like a debt jubilee, were totally new to me.

While any one of his ideas seem unlikely, Stein persuasively argues that the more of these “miracles” are implemented, the more they will be mutually supportive. Overall, he argues that abundance is possible in terms of education, energy, and opportunity for humanity and the planet as a whole.

Education, Religion, and the Planet

While I was very interested in all of the solutions he proposes, I was especially intrigued to find two points which align with our work at the Monastic Academy: #6, “Legal and economic systems that value the biosphere for its own sake,” and #10, “mutual respect between all major world religions.”

Stein stresses that we must transform our view of the planet, and the way that perception is built into our political and economic infrastructure. We have to find a global, species-wide equivalent of the way of seeing that “many ancient and indigenous cultures did and do” have, where nature, the planet, and the biosphere are seen as “intrinsically valuable, complex and autonomous… worthy of a deep respect and reverence beyond its instrumental value.”

From there, we can “become that evolutionarily unprecedented species that consciously seeks to preserve all other species. We must find ways to save what is left and to be stewards of the emergence and continuation of all future life.” Doing so “will not be profitable in the traditional sense of the word” yet is necessary for our continued survival on the planet, as well as all life.

I was surprised by Stein’s interest in religion and spirituality, and I appreciated his criticisms of American spirituality in general and Western Buddhism in particular. Despite these criticisms, Stein claims there is a “need to revisit the role of religiosity and spirituality as an aspect of human development and education.” He says “the ultimate purpose of education—a Good Life, if you will—has nearly always been understood as a religious question.” Therefore, “re-imagining the future of religion is an essential part of re-tooling educational systems during this time of planetary transformation.”

In particular, he envisions a newfound unity of world religions and spirituality, “where each religion is honored for its unique lights and gifts, but also criticized, held, and healed in relation to its own unique shadow and history.”

He has interesting asides on the role of religious/spiritual public figures in this transition, as well as speculations about the role of monasteries, fueled by observations about the role of “a decentralized network of self-supporting monasteries that preserved certain key elements of knowledge and culture…during the last Dark Age in Europe.” Perhaps monasteries could play a similar role once again in shepherding our species and planet through social collapse and reinvention.

I quite enjoyed and appreciated Stein’s book. I was inspired by the specific ideas Stein puts forth, but also by his well-read, persuasive, and broad-minded form of scholarship.

Still, I can think of a few criticisms of his book. While Stein departs radically from academic norms and conventions in some cases, he is perhaps too loyal to it in other ways. In particular, I think the book could have benefitted from more focus and editing.

While I loved most of Stein’s explorations, some came across as tangents that were not necessary to the main arguments and import of the book. I could envision Stein writing a book ⅙ its size, with the same arguments but with more power for its concision and focus.

Perhaps more importantly, I think some might legitimately criticize Stein as overly optimistic or hopeful. It’s disorienting to juxtapose reading Stein with someone like Jem Bendell or Guy McPherson, who see near-term climate change and social collapse as inevitable, and the extinction of our species and even the planet as a real possibility. What would education in a time without a next world look like?

Criticisms aside, I would highly recommend Education in a Time Between Worlds, and look forward to any future works Stein puts out.

Thank you to Madeleine Charney and Henry Hirsch for reviewing this post, and to Daniel Ryū Thorson for introducing me to Zak Stein’s work.

If you enjoyed this post, consider subscribing to my newsletter, my YouTube channel, or following me on Twitter to get updates on my new blog posts and current projects.