Some time ago, I asked Twitter how they would describe the problems we are facing collectively as a species and on this planet.

I received a number of fascinating answers:

These all seem like important pieces of the puzzle we are facing. In this post, I will share how I would describe the problem, largely based on my training at the Monastic Academy.

Most people are familiar with the problems this planet is facing. I have described these in the past as the Three Threats: the proliferation of nuclear weapons; the destruction of our planetary ecology, resulting in global warming, dramatic loss of species biodiversity, and more; and the risk of general artificial intelligence and other complex, unpredictable, and dangerous technologies. 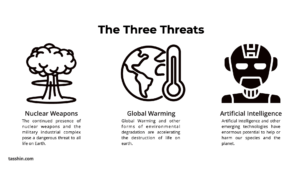 Importantly, these problems threaten life on earth as a whole, not just human civilization. Much of the discussion about existential risks is plagued by a pernicious speciesism and human favoritism. Although we caused these problems, other species are already bearing the brunt of the damage.

Cultural: wisdom, love, and power are not integrated.

Human civilization is the main cause of each of these existential risks. I have previously described what I see as the fundamental problem of human civilization: wisdom, love, and power are not integrated. 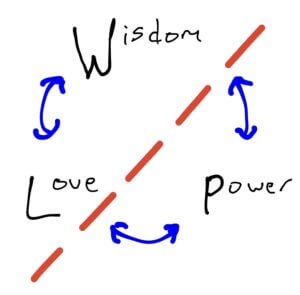 Moreover, our economy is optimized for profit above all else. Our markets profit from the destruction of life on earth, which means that they are incentivized to perpetuate these problems and their root causes. It’s not just human society: our economy is also untrustworthy.

Individual: the human mind is subject to greed, hatred, and ignorance.

Ultimately, these planetary- and civilization-scale problems are rooted in the human mind. The human mind is subject to what Buddhism calls The Three Poisons: Greed, Hatred, and Ignorance. These are fundamentally problems with our perception. Because our perception is inaccurate, we naturally behave in problematic ways. When individuals with flawed perception and harmful behavior form groups and societies, that in turn leads to the civilization level problems we are facing and ultimately the threats to life on earth.

We have described the problem at three scales: the planetary scale, the cultural and societal scale, and the individual scale. Ultimately, the problems we are facing as a planet are caused by problems within the human mind. 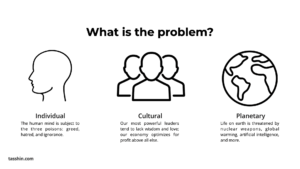 Unfortunately, these scales affect and perpetuate each other. The more greed, hatred, and ignorance we see within individual humans, the more we will see life on earth destroyed. Damage to other species and the environment magnifies cultural problems as well as individual suffering.