Burja Mapping is a way to map power visually, based in Samo Burja’s Empire Theory. Most of the examples I have demonstrated are visual representations of power that people have (as individuals, or collectively as groups or organizations) based on their relative power class.(See the section “What is Empire Theory?” to brush up on what the terms “power class”, “dead”, and “alive” mean).

To map resources, replace the X Axis, which ordinarily represents Vitality, with Ownership, which describes whether a resource is borrowed or owned:

“Power is the ability to realize your will, to affect the world in ways you desire, to achieve your goals. Some things are sources of power. Borrowed power is power that has been given to you and can be taken away by someone else. It usually takes the form of a job or position. Owned power is power that cannot easily be taken away. The major sources of owned power are resources, skills, personal relationships, and knowledge.”

For example, the ability to use a company credit card is a form of borrowed power. Ample experience with public speaking is a form of owned power.

The Y Axis, Power Class, remains the same. Different forms of power have higher or lower amounts of power – and some resources are even “Out,” not coordinated by the relevant high power (your organization, another organization, or even yourself). 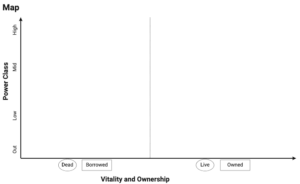 Mapping resources is especially useful when juxtaposed with the view of landscape of social power that a Burja Map provides. 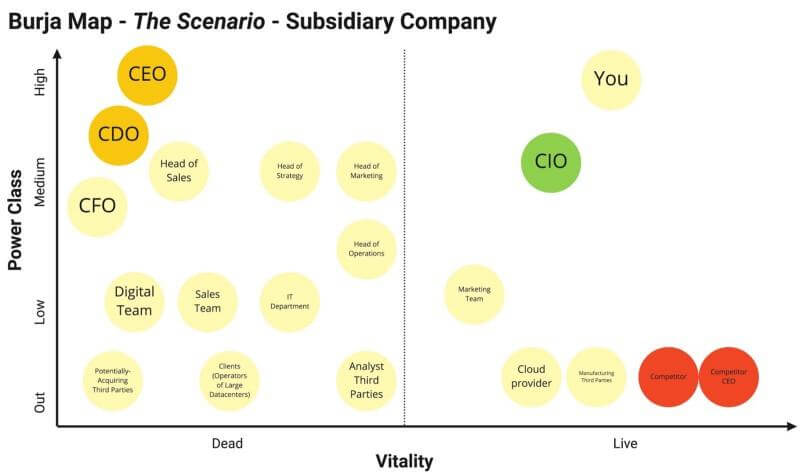 This is similar to SWOT diagrams, which are extremely useful, but only with an understanding of the broader context.

You might also wish to list forms of owned and borrowed power that you could potentially have, that you could move towards. Then, consider how much power each of these have relatively – what power class they should be grouped in. You now have sufficient information to make a map of the resources you have available to you.

Mapping resources has helped me to find leverage points to further my goals. My current mission is to help our new monastic tradition succeed and flourish. I have used Burja Mapping to map our organization as well as other organizations that we have worked closely with. (I’m not in a position to share those maps, but as I showed in Mapping Moneyball, it’s usually not difficult to work out who is where in a power hierarchy.)

I have a vision – the success of our organization. Thanks to my Burja Maps of our organization, I also have a good understanding of our internal power dynamics. Having made SWOT diagrams of the relevant players, I also have a good understanding of their strengths and weaknesses and how that relates to my goals. Mapping resources adds another dimension of situational awareness. Here’s a map I made of the forms of power that I had available to me when I was helping to start OAK, our California location: 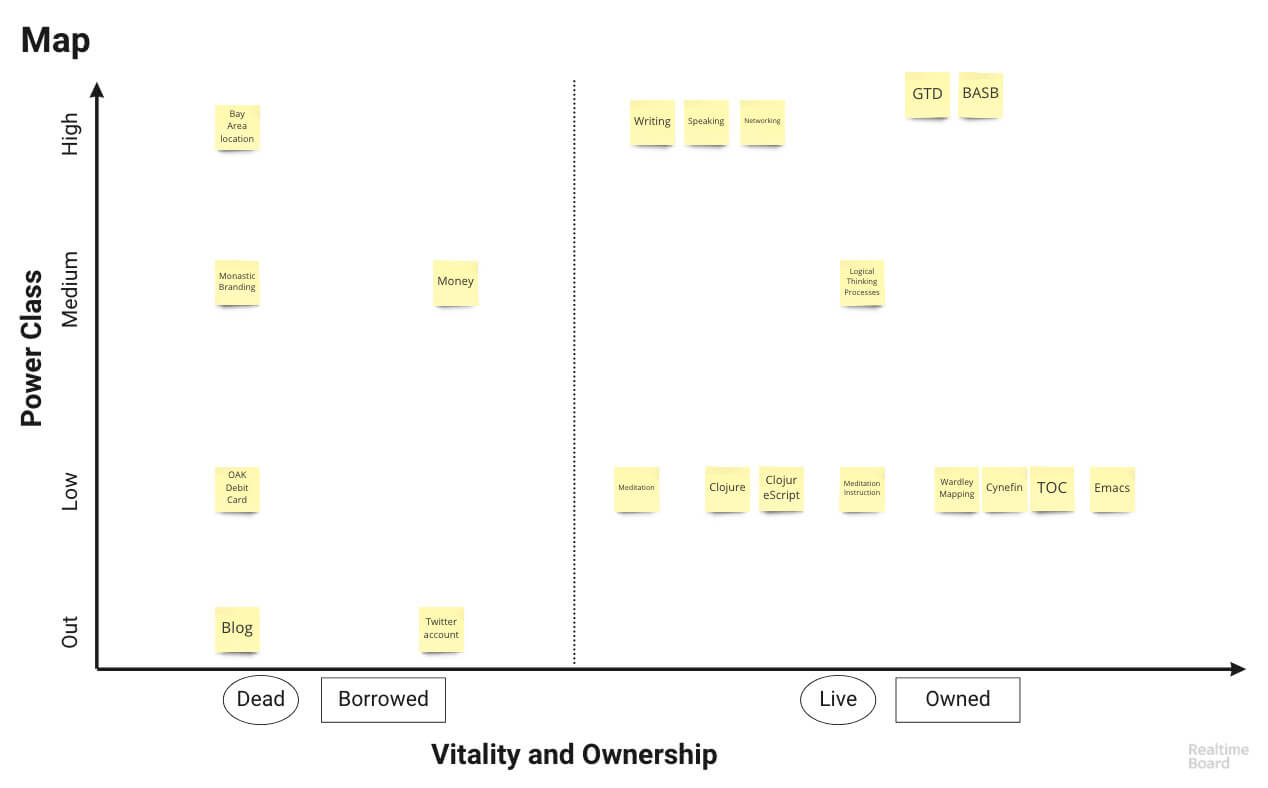 I had several insights from making this map. To name a couple: it occurred to me that the power I was gaining from my social media presence on Medium and Twitter was not something that I owned. Since then, I’ve moved my blog to a platform that I have more control over – and have added an email newsletter as a distribution channel that I also have more control over.

I also found that specific skills that I had were more valuable than, for example, money. It drove home what might otherwise be a banal platitude, that “knowledge is power”. I would reformulate that as “knowledge is high, owned power.”

Mapping resources is a valuable exercise to complement mapping social dynamics and value chains in your organization. With an accurate orientation to these dimensions of power, you will be able to take increasingly effective action in service of your goals and the world.

Thanks to Antoine Buteau, John Grant, and Julius Gamanyi for reviewing drafts of this post.