Ten months after I started training at the Monastic Academy, my teacher, Soryu Forall, gave a talk that completely changed my perspective on what our organization was doing and what it was aiming for.

At the time, I thought of our organization as a place where I could significantly deepen my meditation practice. Between monthly meditation retreats and daily interactions with Soryu, I thought of our place as essentially an excellent retreat center, with world-class instruction that could lead me to genuine classical enlightenment.

Since he was a young child, Soryu has wanted to save life on earth from destructive human activities. I had known this about him, but it wasn’t clear to me how being an excellent retreat center in rural Vermont would help life on earth. Soryu’s talk opened my eyes to the mission’s larger vision, which was far more ambitious.

Soryu said that, based on actuarial charts, he expected to die around approximately 2058. He said that his goal was to have 500 or more locations of our organization around the world by that time. Reaching 500 locations would require us to double our number of locations every five years from one location, which we had at that time, to 500 locations by the time he died. 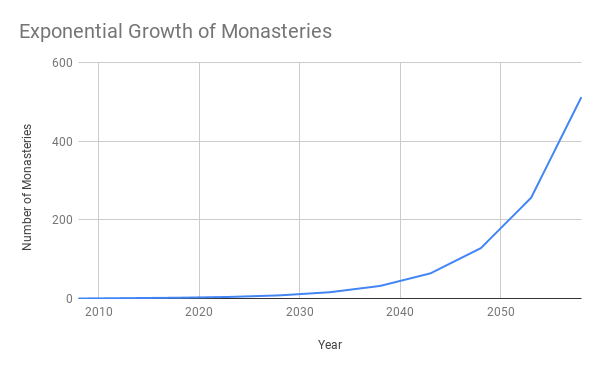 Each of those locations would have a leader that was capable of training other people in wisdom, love, and power, creating more trustworthy leaders.

Those leaders would have a unique vision for how to serve the world at their location. This vision would create a specific focus for the training, as well as a way of serving their local communities and the world at large.

As our community grew in size, from one location to two, four, eight, sixteen, thirty-two, and beyond, we would develop a network of monasteries. This would form a larger community of monasteries collaborating and competing with each other to succeed at a larger vision.

On the one hand, they would be collaborating with each other: helping to build a new kind of culture, a new kind of training, a new kind of a world where deep contemplative practice is influencing society at large and saving the planet.

But they would also be competing with each other: for the best trainees, training methods, and for resources from civilization at large (primarily money and land).

This is a similar vision to the model of the university system. Universities compete for students, funding, training methods and results, but they’re also collaborating: they send each other research, students, and academics. They work on state of the art research together.

It’s also similar to business, where firms are competing for employees, competing for customers and competing for market share. Despite the competitive nature of business, firms also have to collaborate: selling each other products and services, sometimes merging, acquiring each other, collaborating on various projects and partnerships. It’s also common for businesses to try to grow exponentially, from a small start-up to a large business that changes the world – something I learned about when I read Elad Gil’s High Growth Handbook (notes), which is about scaling startups from 10 employees to 10,000 employees.

As we approached 500 centers, we would have an increasingly significant impact on human culture, civilization, and history. This scale of impact would also affect non-human life: animals, plants, the climate, and the planet itself. Having seen the benefits of monastic training in my own life, it is humbling and inspiring to consider just how much that scale of impact would benefit others – not just humans, but all life on Earth.

I heard this vision from Soryu in late 2015. At the time of this writing, it is late 2020, five years later. Not only are we on track to double every five years but we’re actually ahead of schedule. 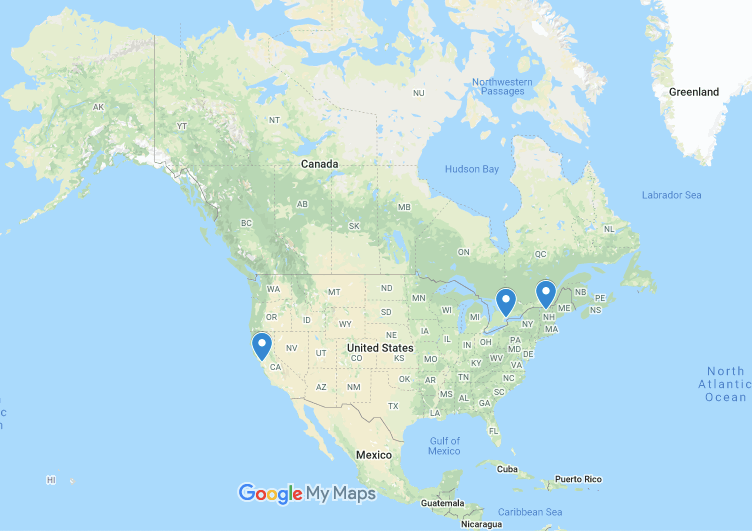 Each of these monasteries has a tree name – one tree in a forest of monasteries. The name for this forest, our overall community, is Cedar, the Community for the Experience and Development of Awakening and Responsibility.

We also have a growing pool of teachers who are qualified to teach in our tradition, not just to instruct meditation but to give one-on-one interviews and to lead a monastic training center.

As I listened to Soryu’s talk, I realized that MAPLE wasn’t just a very good retreat center. Soryu was actually trying to change the world.

Perhaps more than anything else, this vision of exponential monastic growth has inspired me to continue my monastic training. If we were just an excellent retreat center, it would have been easy to leave the Monastic Academy and visit another center or monastery.

But training at the Monastic Academy gives me a once-in-a-lifetime chance at being of service. I can help my community, the world at large, and life on Earth. Training here is a real and practical way for me to embody the Bodhisattva ideal of serving all living beings.

Thank you to Nathan Hechtman for helping to draft this post, and to Peter Xūramitra Park for reviewing this post.

If you enjoyed this post, consider making a donation to the Monastic Academy, a training center dedicated to creating wise, loving, and powerful leaders.